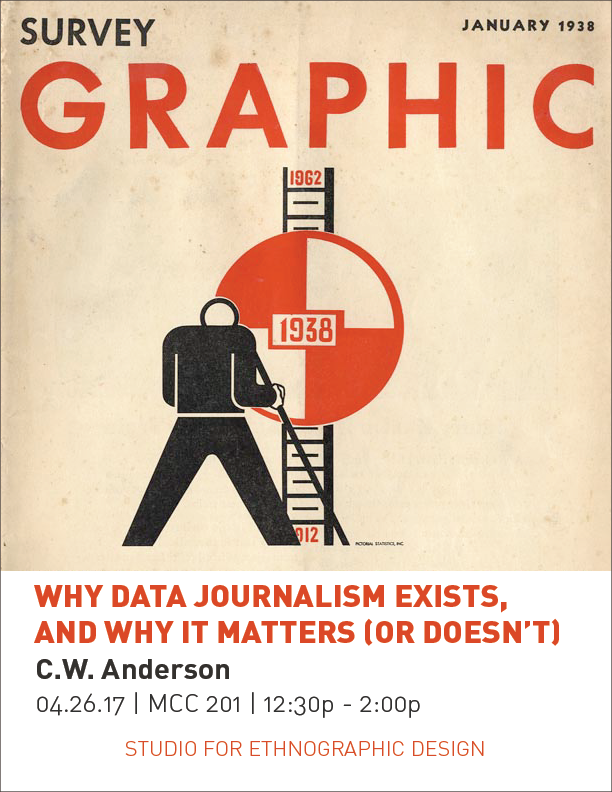 Is journalism today better than it has ever been? The question, on the surface, seems ridiculous. Fox News and Breitbart.com dominate our political discourse. A reality-television show star leveraged the affordances of cable news to vaunt himself into the Presidency. Newspaper circulation numbers and journalist employment levels are dropping. Nevertheless this talk will argue that, at certain elite publications, a lot of journalism is more accurate, more quantitative and more explanatory than ever– and this elite journalism, paradoxically, matters less than ever to American political discourse.

This talk tries to get at these issues by taking a trip back into the recent past, and examining the origins of our modern form of quantified journalism. It outlines five reasons why data journalism exists in its present day form, reasons that lead back to the intellectual dynamics of the 1960s and 1970s. I look at (1) the work of the Russell Sage Foundation, Columbia University, and the University of Wisconsin in promoting the “social sciences in the media” initiative in the early 1960s; (2) an emerging vision of computers and databases that allowed them to be integrated into journalistic work; (3) changing notions of what was meant by “investigative reporting” in the 1970s; (4) academic developments in journalism schools; and (5) a long-term crisis in notions of journalistic objectivity in the 1960s, in part prompted by the emergence of “the new journalism” at about the same time.

Beyond simply complicating our understanding of the sociology of data journalism, this more nuanced history allows us to better understand why data journalism has achieved such prestige today, why it nevertheless remains an outlier in most newsrooms, and how it has navigated the larger crisis in objective knowledge production gripping not only newswork but academia in general.
C. W. Anderson is Associate Professor at the College of Staten Island (CUNY); as of the Fall of 2017 he will be a Professor of Media and Communication at the University of Leeds. He is the author, coauthor, or coeditor of multiple books and articles on digital journalism, sociology, political communication, and science and technology studies.