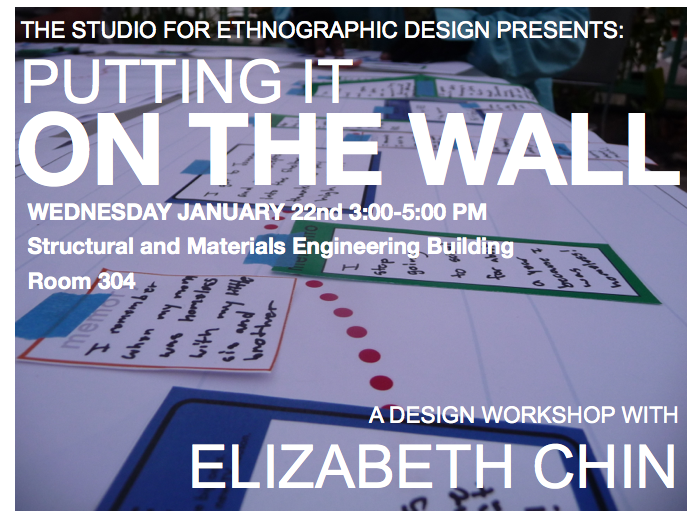 THE PLAN: Participants will use the designerly technique of “putting it on the wall” to visualize, organize, and work through complex material. Bring a project you are working on, preferably one in the relatively early stages with which you are struggling. We will be working on 32×40 foam core (provided by SED), so when you print out images and etc keep the overall size in mind (don’t make them huge).

ELIZABETH CHIN is an anthropologist whose practice includes performative scholarship, collaborative research engagement, and experimental ethnography. Primarily concerned with questions of social justice and inequality, her work features examinations of race, class, and gender in the urban United States and in Haiti. Her book Purchasing Power: Black Kids and American Consumer Culture (Minnesota 2001) was a finalist for the C. Wright Mills Award.  Her course “The Unbearable Whiteness of Barbie” was identified as one of the so-called “dirty dozen” by the Young America’s Foundation which listed the “most bizarre and disturbing examples of liberal activism in the classroom.”  She joined Art Center in 2011 to become a founding member of the Media Design Practices/Field program. 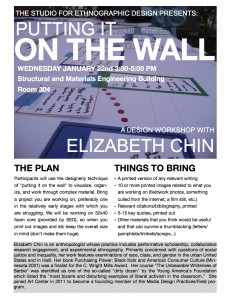 On Thursday December 6th, a team from UC San Diego headed north to the UC Irvine Center for Ethnography “Fieldwork After Ethnos” conference. As advertised, Tobias Rees (McGill) gave a thoughtful paper exploring the forms assumed by fieldwork when researchers are no longer interested primarily in ethnoi, the territorially imagined societies and cultures at the center of classical traditions of ethnography.

For those interested, you can find more detailed notes here, Notes on Fieldwork After Ethnos but I thought I would summarize some key points too.

What characterizes fieldwork “after ethnos”?

Basically, this is the difference between going to study the effects of neoliberalism on culture in Russian cities vs. going to Russian cities to question neoliberalism itself (as in Steven Collier’s Post-Soviet Social) Or, the difference between doing an ethnography of geeks and an ethnography of open source software (as in Chris Kelty’s Two Bits).

Other scholars mentioned as doing this kind of work included Joe Dumit, Stefan Helmreich, Cori Hayden. At this point, I think all the STS people in the room are kind of wondering what the big deal is here – isn’t this just what we are already doing?

Then it finally comes out that almost no one in the room – including those presenting – currently has a home in an anthropology department ( though we all “like the anthropology community”). So, as ethnographic methods continue to permeate all kinds of disciplines, do these interventions need to take place in anthropology? Or are we content with supportive homes found elsewhere?

But not everyone agrees with key premises here: does the ‘after ethnos’ argument start with a rather limited (and classical) understanding of ethnography today? Ethnography is arguably better defined as the study of practices than of bound systems. In any case, not all anthropology should be ‘after ethnos.’

The day ends with the suggestion that we do a better job documenting what we mean by ethnos. The Greek definition even includes ‘swarm,’ meaning we could have an ethnos of bees! If ethnos does not have to be defined by current associations with race, class, gender etc. alone, then maybe the solution is to reconfigure ethnos rather than divorce it from fieldwork altogether.