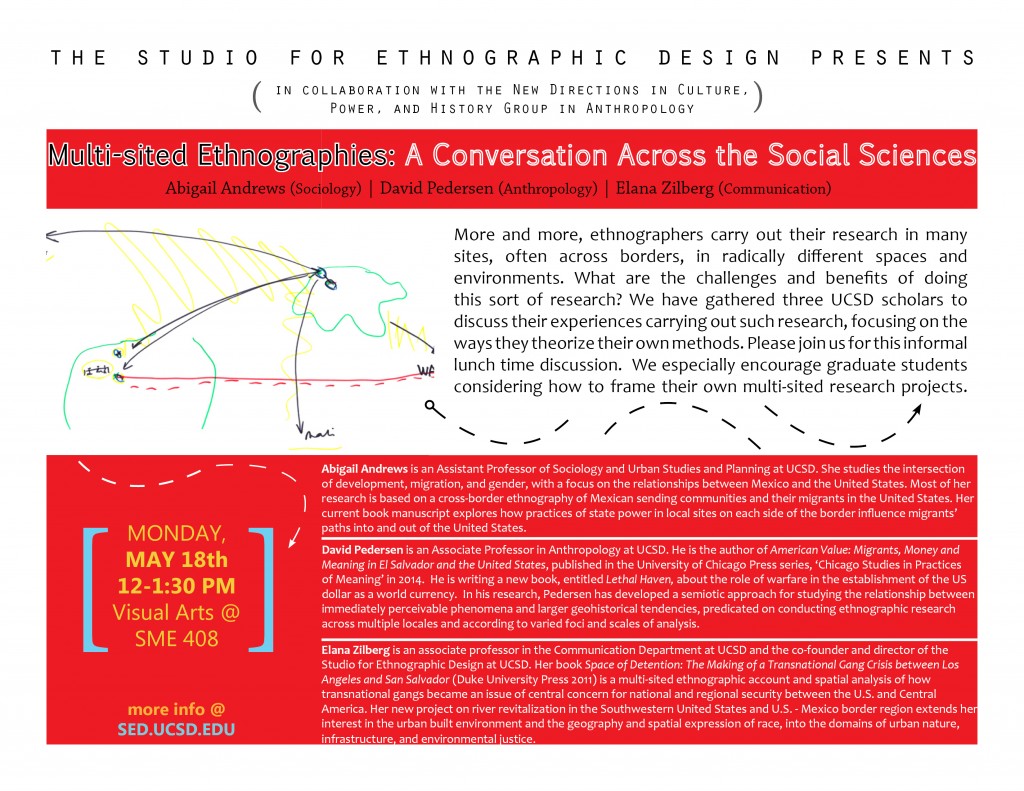 Join SED for a discussion on multi-sited ethnographic research design co-hosted with the New Directions in Culture, Power, and History Group in Anthropology. More and more, ethnographers carry out their research in many sites, often across borders, in radically different spaces and environments. What are the challenges and benefits of doing this sort of research? We have gathered three UCSD scholars to discuss their experiences carrying out such research, focusing on the ways they theorize their own methods. This informal lunch time discussion will enact a conversation about ethnography, the challenges and possibilities of multi-sited research across the social sciences. Graduate students considering how to frame their own multi-sited research projects are encouraged to attend.

Abigail Andrews is an Assistant Professor of Sociology and Urban Studies and Planning at UCSD. She studies the intersection of development, migration, and gender, with a focus on the relationships between Mexico and the United States. Most of her research is based on a cross-border ethnography of Mexican sending communities and their migrants in the United States. Her current book manuscript explores how practices of state power in local sites on each side of the border influence migrants’ paths into and out of the United States. It then considers how migrant communities respond to exclusion and exploitation, sparking new forms of cross-border political advocacy. In this work — and following the interactions across transnational migrants communities — Professor Andrews grapples with the question of how power and politics operate across place.

David Pederson is an Associate Professor in Anthropology at UCSD. He is the author of American Value: Migrants, Money and Meaning in El Salvador and the United States, published in the University of Chicago Press series, ‘Chicago Studies in Practices of Meaning’ in 2014. He is writing a new book, entitled Lethal Haven, about the role of warfare in the establishment of the US dollar as a world currency. In his research, Pedersen has developed a semiotic approach for studying the relationship between immediately perceivable phenomena and larger geohistorical tendencies, predicated on conducting ethnographic research across multiple locales and according to varied foci and scales of analysis.

Elana Zilberg is an Associate Professor in the Communication Department at UCSD and the co-founder and director of the Studio for Ethnographic Design at UCSD. Her book Space of Detention: The Making of a Transnational Gang Crisis between Los Angeles and San Salvador (Duke University Press 2011) is a multi-sited ethnographic account and spatial analysis of how transnational gangs became an issue of central concern for national and regional security between the U.S. and Central America. Her new project on river revitalization in the Southwestern United States and U.S. – Mexico border regions extends her interest in the urban built environment and the geography and spatial expression of race, into the domains of urban nature, infrastructure, and environmental justice.